Silver Speculators reduced their bullish bets for a 2nd week 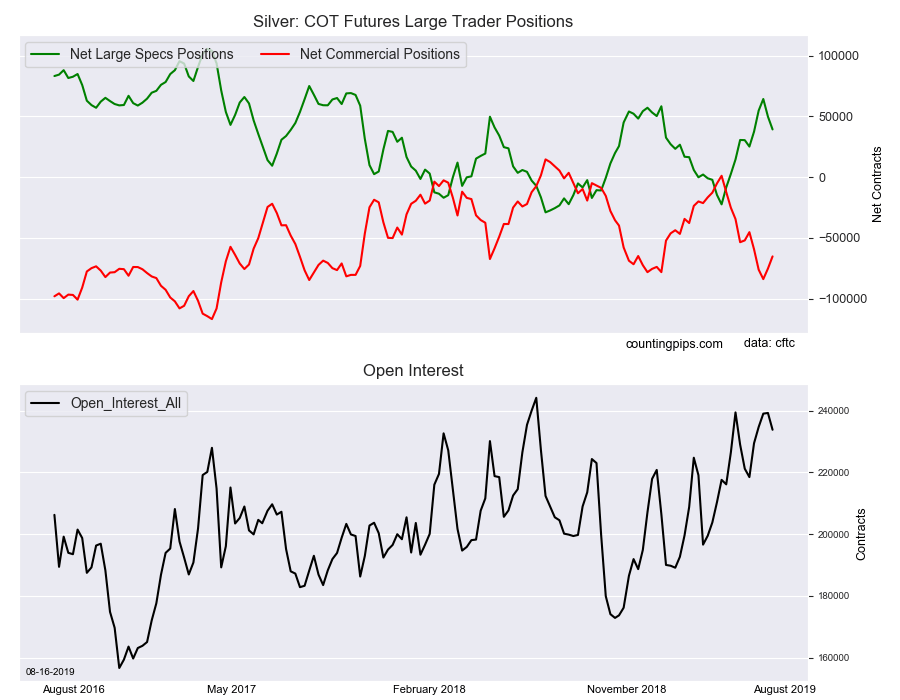 Large precious metals speculators cut back on their bullish net positions in the Silver futures markets again this week, according to the latest Commitment of Traders (COT) data released by the Commodity Futures Trading Commission (CFTC) on Friday.

The non-commercial futures contracts of Silver futures, traded by large speculators and hedge funds, totaled a net position of 39,269 contracts in the data reported through Tuesday August 13th. This was a weekly lowering of -10,563 net contracts from the previous week which had a total of 49,832 net contracts.

Large speculator positions declined for a second straight week by over -10,000 net contracts. Silver bets had been on a strong run-up in the previous months as positions had risen for seven out of the previous nine weeks (a total gain of +86,706 net contracts) before the recent slide. Silver positions continue to have strong bullish sentiment and have now been in bullish territory for ten straight weeks.

The commercial traders position, hedgers or traders engaged in buying and selling for business purposes, totaled a net position of -65,233 contracts on the week. This was a weekly uptick of 10,033 contracts from the total net of -75,266 contracts reported the previous week. 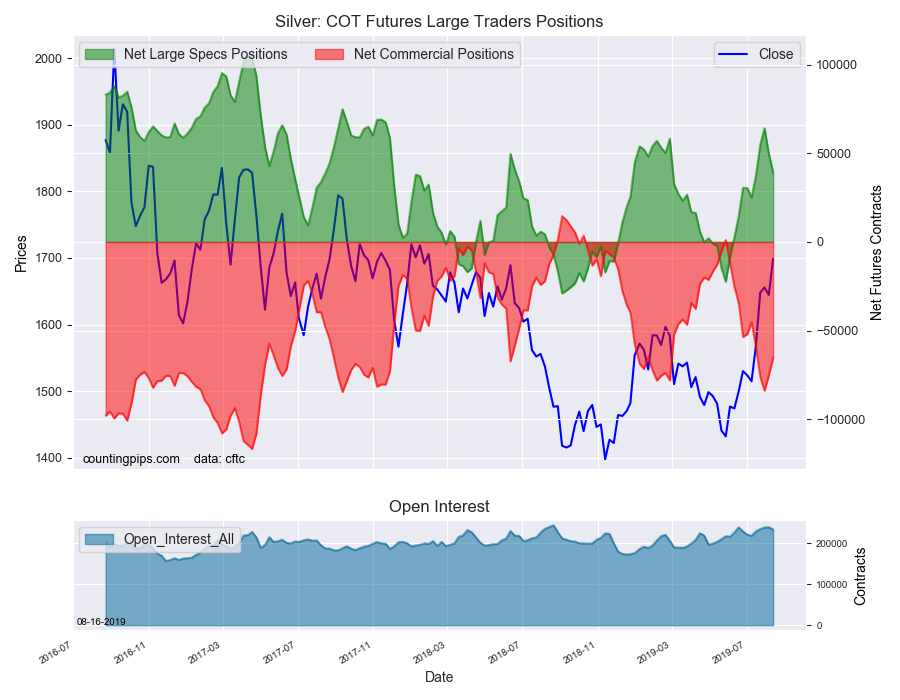 Over the same weekly reporting time-frame, from Tuesday to Tuesday, the Silver Futures (Front Month) closed at approximately $1698.50 which was a gain of $54.0 from the previous close of $1644.50, according to unofficial market data.

*COT Report: The COT data, released weekly to the public each Friday, is updated through the most recent Tuesday (data is 3 days old) and shows a quick view of how large speculators or non-commercials (for-profit traders) as well as the commercial traders (hedgers & traders for business purposes) were positioned in the futures markets.

The CFTC categorizes trader positions according to commercial hedgers (traders who use futures contracts for hedging as part of the business), non-commercials (large traders who speculate to realize trading profits) and nonreportable traders (usually small traders/speculators).

Article By CountingPips.com – Receive our weekly COT Reports by Email

Risk Disclosure: Foreign Currency trading and trading on margin carries a high level of risk and can result in loss of part or all of your investment. Due to the level of risk and market volatility, Foreign Currency trading may not be suitable for all investors and you should not invest money you cannot afford to lose. Before deciding to invest in the foreign currency exchange market you should carefully consider your investment objectives, level of experience, and risk appetite. You should be aware of all the risks associated with foreign currency exchange trading, and seek advice from an independent financial advisor should you have any doubts.

All information and opinions on this website are for general informational purposes only and do not constitute investment advice.